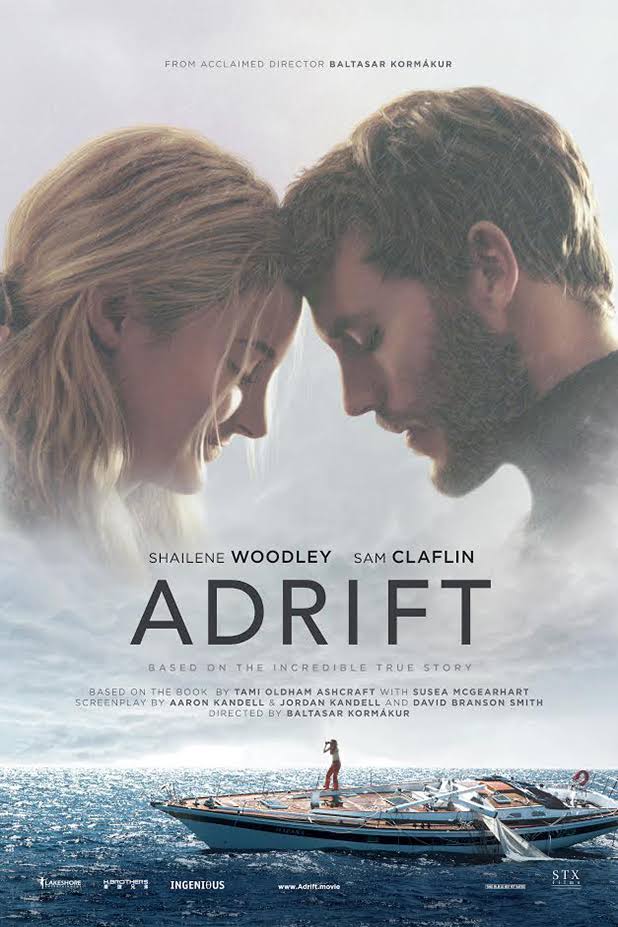 *Adrift – A cinematic masterpiece in writing, strong female characters, based on the story of one strong woman.*

A few weeks ago, I was very excited to be invited to an early screening of the new film ‘Adrift’ by director and producer Baltastar Kormákur. This was at the official unveiling of the renovated Odeon Luxe on Broadway Plaza. If Kormákurs name doesn’t seem familiar, you may know him from his 2015 film ‘Everest’.

Shailene Woodley plays Tami and having been about the only good thing in the Divergent trilogy. Having given a solid performance in ‘The Fault in our Stars’, she stands out in here with a fantastic portrayal of Tami. Sam Clafflin plays her love interest Richard. You will recognise Sam from his portrayal of Finnick in The Hunger Games series. He’s also played several other strong supporting potential love interest type roles in films such as ‘Me Before You’,‘Snow White and the Huntsman’ and totally nails it here. Adrift also features a great supporting cast. Home and Away’s Grace Palmer is excellent, as are Jeffery Thomas and Elisabeth Hawthorne. Elizabeth, especially, gives a fantastic performance in a touching scene on the boat regarding some sad news concerning the health of her character, Christine’s mother.

This true story follows Tami Oldham and Richard Sharp, a young couple caught up in a catastrophic hurricane. About a quarter of the way into the movie, Tami finds the body of Richard who had been washed aside during the storm. This is a very emotive moment, speaking to Shailene Woodley’s fantastic acting that is, unfortunately, revealed in the trailer.  It would have otherwise made a brilliant revelation, in addition to other reveals and plot twists later in the movie. Adrift intercuts the ‘in the moment reflection’ of their experiences, drifting with flashbacks of how they met and fell in love. It culminates with the hurricane hitting the boat, Tami’s experience mending and sailing the boat as well as tending for herself and a dependent Richard. Sam Clafflin plays his role well, switching between the playful boy next door type to his vulnerable side, reliant on Tami.

The film ending is truly shocking and something I won’t spoil for you. It does have a touching tribute to the lives of Tami and Richard, showcasing real life footage and photographs of the pair throughout the years.

The film really captures well the experiences of Tami; her fears, determination, resilience as well as her love and vulnerabilities are all on display. The movie is a a masterpiece in the demand for better representation and coverage of strong female role models.

I certainly love Kormákur direction in Adrift. The cinematography is beautiful, with the framing and lighting being faultless. Kormákur cuts effortlessly between the horror of the sinking boat and the angelic sun-soaked paradise of Tahiti, in stunning juxtaposition. The boat sequences takes stylistic nods from Jaws, I think are all the better for it elevating the movie further.

My only other criticism of the film outside of the trailer is the musical score, which is only adequate for the most part. In some parts, the score felt overplayed and over dramatised, detracting from what was on screen. Rather than complimenting the visuals, it seemingly mocked them in an exaggerated way that felt cartoonish.

Despite this, I would still very much recommend a viewing of this film.

The movie certainly made the best use of the high definition audio present at the Odeon Luxe. It gives an immersive, almost 3D, audio experience. I also enjoyed the comfort provided by the new, superior, fully reclining chairs.

I experienced Adrift on their new iSense screen. It dominates almost every inch of the wall and is far superior to a regular screen. For only £2 more, it’s a great upgrade, especially for a high budget epic or action flick. The newly renovated Odeon Luxe has 12 screens and is open now on Broadway Plaza.

I actively encourage you to check out both. Find out more about the ODEON Luxe Broadway Plaza