Game of Thrones has seen its final episode, but for anyone looking for more George R.R. Martin fantasy with a lot of murder, there is some possible good news. In a blog post celebrating the finale of the HBO series, Martin briefly mentioned an upcoming collaboration with a Japanese games studio.

While he was vague, the details are out there. Rumours have been circulating for a while that the Japanese developer in question may be From Software. Yes, that’s right, the Dark Souls guys. Which makes sense.

Details are sparse as these are just rumours, but a source at Gematsu, who broke the story, said that we’re likely to find out more at Microsoft’s E3 conference. Stay tuned for 9 June then.

SONY AND MICROSOFT LOOK TO THE CLOUD

A little while back, Google announced Stadia, their new game streaming platform. There are rumours circulating that Amazon is planning its own (no doubt tied to Twitch, I reckon).

It’s gotten traditional platform holders a little spooked. So spooked that they’ve realised the only way to defeat these titans is to put aside their differences and team up.

Sony and Microsoft have announced a joint deal to build streaming infrastructure for gaming.

Both companies have streaming systems in place already. Sony has PlayStation Now, and Microsoft have many cloud services across PC and console. And it’s this latter point that led to this deal happening. Sony clearly aren’t happy with the limited growth of PS Now and want to leverage Microsoft’s vast established architecture to prevent being eaten by Google. Microsoft benefit from an ally who’s also shared traditional platform space to fend off the newcomers. The enemy of my enemy is my friend and all that.

It’s a surprise development, not least to staff within PlayStation, who had no idea this was happening. In fact, from the information that’s out there, this seems to be a deal made by the companies but not under the Xbox and PlayStation umbrellas. It’ll be interesting to see what happens from this.

PANIC WANT A PLAY DATE WITH YOU

Panic are a company not afraid to take risks. They previously published indie darling Firewatch and are currently aiding the development of Untitled Goose Game.

Their latest announcement is somehow stranger than a game about being a goose. What you’re seeing above is the Play Date, a tiny handheld system with a black and white screen and a hand crank.

If that sounds odd, get ready, because we’re just scratching the surface. The system is set to run quirky small games in black and white, and the weird crank is a control stick of sorts. Its sleek design comes from Swedish firm Teenage Engineering, who previously made a flatpack synthesiser, so this seems like a logical progression from that, I guess.

It also won’t get traditional game releases. There’s no physical media or a store, instead games get released on a weekly basis in seasons, and you won’t know anything about them until you play them. They’ll all be unique to the system, and a few developers are on board to develop for them.

They include the likes of Keita Takahashi, creator of Katamari Damacy, and Bennett Foddy, developer of wacky athletics game, QWOP. So that should give you an idea of the madness set to unfold on this bizarre little system.

I don’t know what to think of it. I don’t think it’s bad, it’s just odd and out of nowhere. I hope it finds its niche though, because it’s such an endearing system.

Perhaps quirky indie nonsense isn’t your jam. Instead, you’re desperately crying out for a way to bring the games you’re already playing into one place. Well, the latest update to Galaxy from GOG.com looks set to bring you exactly this.

GOG’s aim is to let you import game libraries from all platforms. Steam, Epic, Origin, uPlay and Battle.net look like reasonable targets, but GOG seemingly want to go further than this. They want to bring in PSN and Xbox Live too, and presumably Nintendo’s setup too.

The idea is to provide a single launcher that tidies up the clutter of having multiple launchers on the go. It’ll feature a collated friends list and game library and will have dedicated cross-platform leaderboards for friendly competition. It’s ambitious, but it sounds amazing. Its success seems like it’ll hinge on whether the other platforms are willing to comply.

Who do you reckon would be on board? Xbox Live is almost a guarantee, and Steam may be willing to play ball.

Epic and the publisher-mandated launchers may be a struggle, and from the console space, it’s unclear how likely Sony would allow PSN access.

Nintendo could be included too, but since their online system is a nightmare patchwork constructed by people who just discovered the Internet, it’s not clear how well this would fit into that infrastructure. I guess time will tell.

Elsewhere in PC launchers, Epic are managing to cock up their own store yet again. They launched their first major sale last week, and it didn’t go well. At first, all seemed well. Publishers applied their own discounts, with Epic themselves applying a universal $10 discount. Sounds great, right?

Some publishers disagreed. Several games saw prices re-jigged, and two notable pre-orders – Borderlands 3 and Bloodlines 2 – got pulled from the store entirely. The removal is temporary, but no reason was provided for any of these changes.

The issue seems to be Epic’s discount, which sources suggest Epic didn’t communicate to publishers beforehand. This resulted in sharp discounts that brought many games down to uncomfortable prices.

This poor communication could be damaging for Epic in the long run. With publishers and developers as their focus, this could damage the relationships they’ve been chasing. Hopefully we’ll see some changes to this kind of thing in coming months
.

With Detective Pikachu whipping up a storm in cinemas right now, it’s kind of apt that a couple of news stories about future video game movies have popped up this week.

First up, it’s Sony, who’ve set up PlayStation Productions. This is a studio whose role is to make movies and TV shows based on first-party Sony properties in-house, using connections in Sony Pictures. Several franchises are reportedly in development, although no details are available yet.

Shawn Layden of Sony Interactive Entertainment stated Marvel as an inspiration. Does this mean we’ll be seeing a PlayStation Cinematic Universe sometime soon? Hopefully we’ll see something good out of this.

Elsewhere, the Mortal Kombat movie reboot has a release date. If you want to see Scorpion ripping out spines on the big screen, mark your diaries for 5 March 2021.

James Wan of Saw fame is producing, and relative newcomers Simon McQuoid and Greg Russo are directing and writing respectively. While this is his first credited movie on IMDb, McQuoid does have some experience bringing video games to life, as his excellent “Michael” ad for PlayStation demonstrated (https://www.youtube.com/watch?v=7_fPtazfALA).

Filming starts in June in Australia, although currently no plot details are known. Let’s hope it’s better than the past attempts to adapt the franchise to the screen, eh?

One of the game industry’s universal truths is that EA’s Frostbite engine is leaving developers cold. It was one of the major issues cited in the recent Polygon exposé into Bioware’s internal troubles, in fact. EA seem to have taken this on board, as they recently announced a major update to Frostbite. However, the feedback they seem to have listened to is “it doesn’t make nice enough hair.”

In a recent tech demo, EA showed off the fancy new hair physics the next-gen edition of Frostbite will be able to render. It is pretty nice hair. It’s bouncy and swooshy as all good hair should be, and doesn’t flail around as video game hair systems have been prone to do. I remember playing Heavenly Sword on the PS3 and wondering why protagonist Nariko’s hair seemed to be a sentient being, for instance.

It doesn’t really show off how well this would work in actual gameplay though. Especially if the game has to render literally everything else in the scene. Such as the protagonist’s face. Because, oh yeah, the demo was also the thing of nightmares as the model with the nice hair was also a faceless mannequin. Thanks, EA. I didn’t want to sleep tonight anyway. 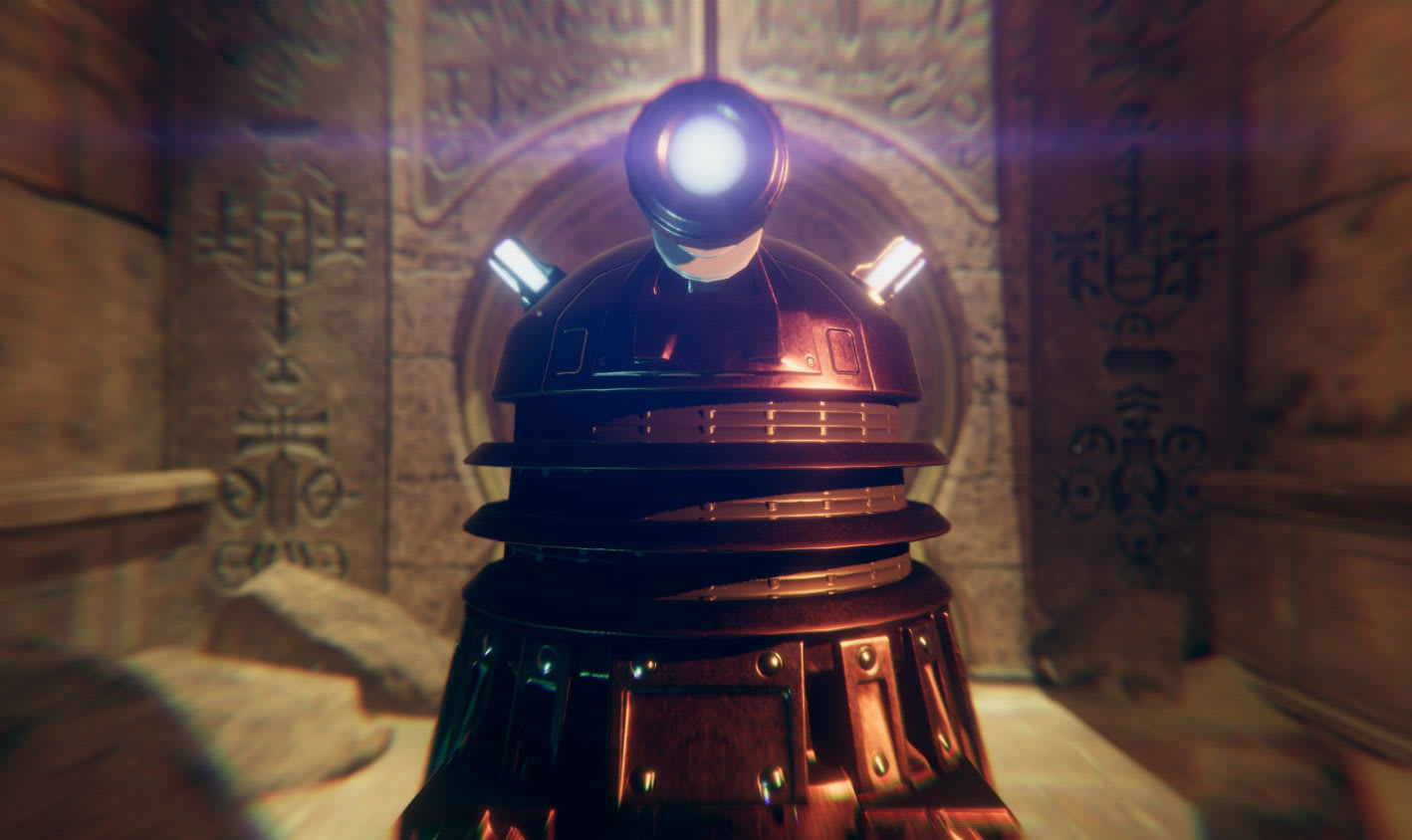 There have been a few announcements of new games and release dates for new games this past week. Here’s a quick summary:

And now, here are the new releases for the week!

Crowdfunded WWII shooter Battalion 1944 hit PC this week, as did Three Kingdoms, the latest in strategy favourite series Total War. This week also saw Epic’s online RPG Dauntless come out of beta and get a full release. One for the Monster Hunter fans there.

Then there’s Team Sonic Racing, the latest in the Sonic racing franchise. It’s a little lacking in my eyes, going from Sega characters across the board to just Sonic and friends. It does look fun, but I guess we have to wait for another edition to get Yakuza’s Kazuma Kiryu in an OutRun car.

My Game of the Week this week is Observation, a space horror title for PC and PS4. Something has gone terribly wrong on a space station and it’s up to you to solve the mystery.

Standard for space horror, but there’s a twist. You play as SAM, the station’s AI, utilising cameras and drones to guide astronaut Dr Emma Fisher. It’s a unique perspective on space-based horror mystery, so it’s definitely the standout for me this week.

And that’s it for this week! It’s been a big one, surprisingly, as I was expecting everything to hold off until E3. I’ll see you next week with more, but until then you can find me on YouTube and Twitter, and of course, on the Geeky Brummie podcast every week with the rest of the team. See you later!