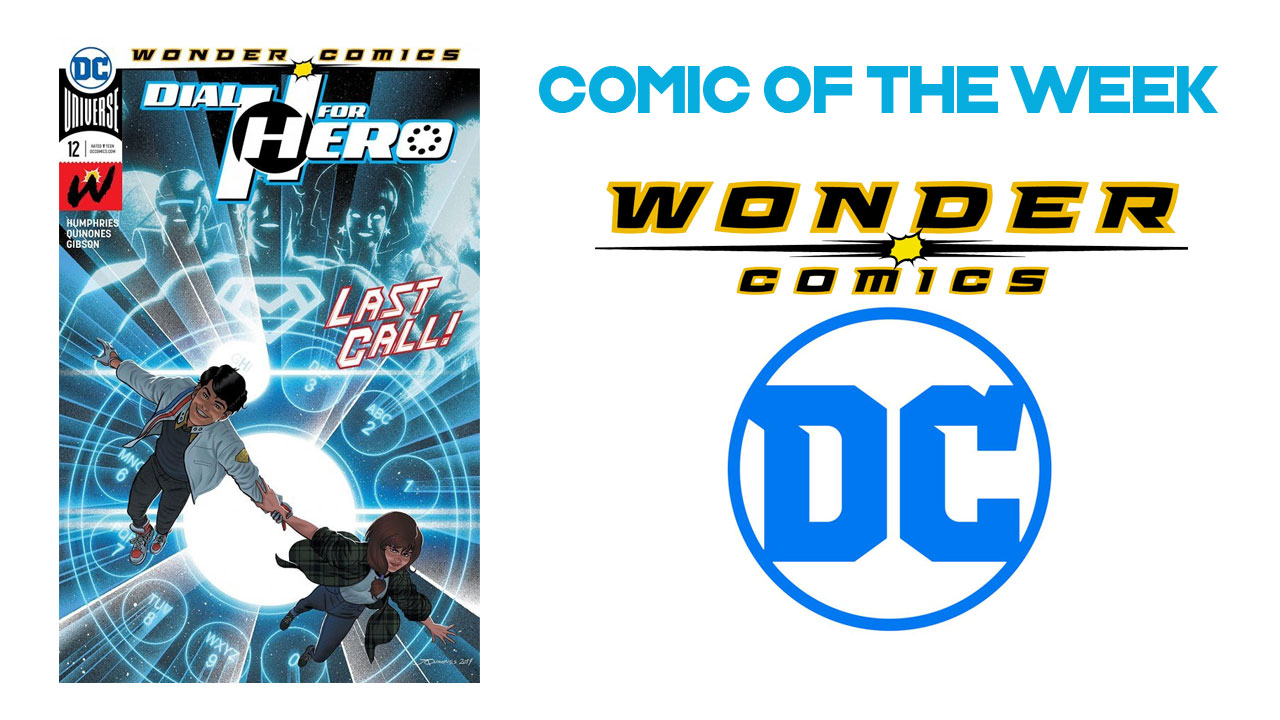 The Geeky Brummie Pull List with Dial H For Hero.

M y comic of the week this week it’s the final issue of a series I’ve loved since the beginning – Dial H for Hero #12 from DC’s Wonder Comics Imprint.  We also have a new Wonder Comics title begin this week that looks to be a lot of fun. This one is Amethyst #1 written and illustrated by Amy Reeder .

I also recommend a bunch of other great comics to discover this week including a bunch of Marvel and DC titles and a new comic from Berger Books.

Pretty much all of the books coming out of the Wonder Comics imprint have been (please forgive the pun) wonderful. Dial H For Hero has been fantastic. Sam Humphries and Joe Quinones have weaved a beautiful story that explored the age old subject of why people become heroes and how ‘with great power, comes great responsibly’.  Miguel and Summer’s relationship has been real and heartfelt and I can see how the whole Wonder Comics line is totally perfect for the readers it is aimed at. The artwork in the series has been both playful and powerful and Joe Quinones ability to channel the styles of so many incredible artist has been marvellous to watch. I’m glad the series was expanded from the original 6 issues to 12 issues as it’s  giving the story the room it needed. I hope that both Humphries and Quinones get to work together again and that Wonder Comics continues to put out such enjoyable comics.

“Miguel must face his most dangerous opponent yet—himself! With the fate of the Multiverse hanging in the balance, Miguel must battle his literal dark side. Will he and Summer survive the experience? And will the power of the H-Dial be lost for-ever? Find out in the thrilling conclusion to this innovative series!“ Amy Reeder was first discovered through the fourth of Tokyopop’s Rising Stars of Manga competition. She then went on to write and illustrate Fool’s Gold and was the artist on  Madam Zanadu for Vertigo,  Rocket Girl at Image and Moon Girl and Devil Dinosaur for Marvel Comics. Now Reeder is bringing us what I predict will be the next Wonder Comics hit, Amethyst, a new 12-issue series. Reeder is a huge fan of the original 80s Amethyst, Princess of Gemworld series but she’s updating the character to embrace a modern-day sensibility. This looks to be a lot of fun and the psychedelic visuals Reeder is providing look amazing. One to add to the pull list.

“Following her triumphant reintroduction in the pages of Young Justice, the new Amethyst miniseries follows teenager Amy Winston—a.k.a. Princess Amethyst—as she returns to her magical kingdom to celebrate her 16th birthday in style. The only problem? Her kingdom is missing, her subjects have vanished, and none in the realm of Gemworld—even her best friend, Lady Turquoise—remain loyal to her house! Alone and dejected, Amy’s forced to find new allies and confront dark secrets on an all-new quest to the farthest reaches of Gemworld.“