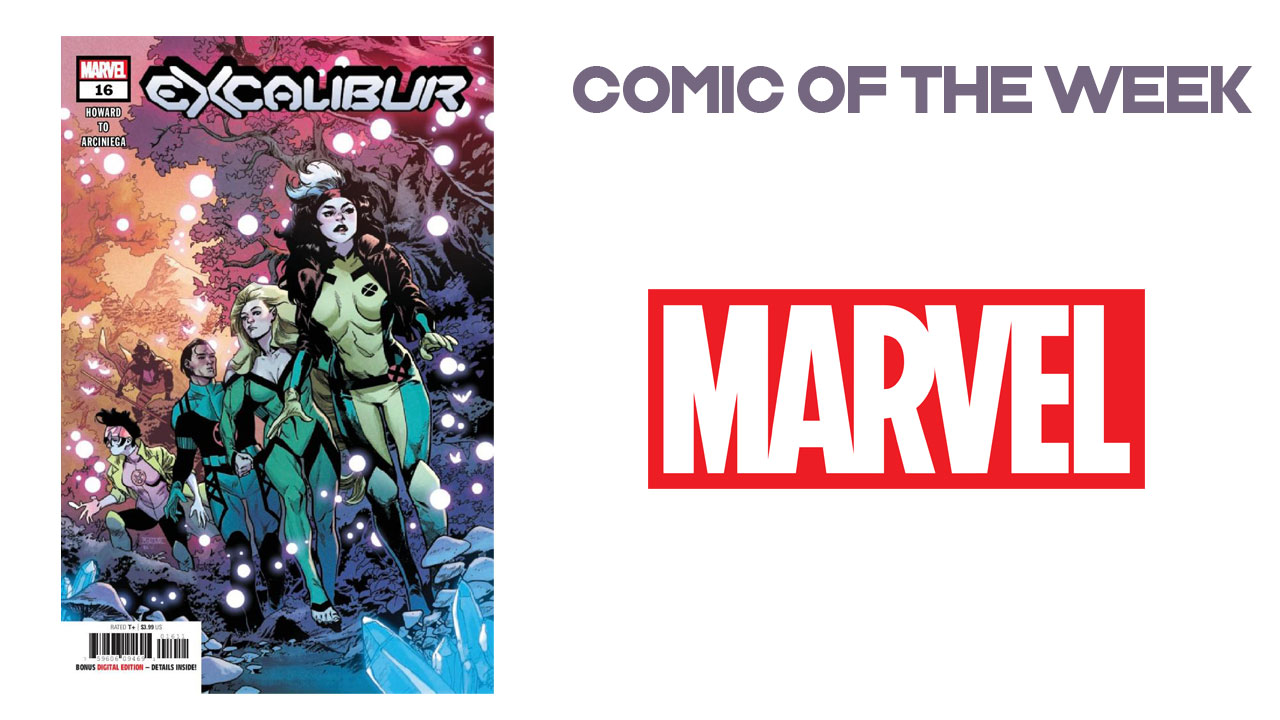 In the last regular Pull List of 2020 we take a look at the comics that are rounding out the year. Today we only have Excalibur on the Pull List but next week we have the long delayed final issue of ROM: Dire Wraiths, Star Trek: Year Five featuring Gary Seven and X-Men

In Meanwhile… we take a look at the recently launched Future Shocks Radio.

VERSE XVI
THE SWORD IS SHEATHED! The team is left changed in the aftermath of X OF SWORDS…and some things lost cannot be replaced.

I’ve been enjoying this book and thanks to the recent X of Swords storyline things have changed for the team. With the loss of Betty and the reintroduction of the Captain Britain Corps things are very much in flux right now. It’ll be very interesting to see what happens next. 1969: The secret Earth satellite safeguarding the moon landing is infested by Dire Wraiths! Worse, the Wraiths now have transport to Earth. And the crew of  the first moon landing can only stop them by making the ultimate sacrifice! Plus: the special ROM back-up with art by Guy Dorian Sr. and Rom legend Sal Buscema concludes in explosive fashion!The thrilling conclusion to the return of ROM!

This is a interesting alternative history story that doesn’t actually feature ROM himself but it’s been a fun read. ROM does appear in a short backup story with art by original artist Sal Buscema. The future for ROM at IDW is a bit unclear right now and the series has a long way to go to reach the heights of the Marvel version of the character, but I’ve a lot of love from the old silver Spaceknight so I will be keeping an eye on developments. At last – the super secret origin of Gary Seven! Who was Gary Seven before AEGIS turned him into a time-traveling secret agent? What, exactly, does AEGIS want? Answers are revealed and secrets are exposed in this fully painted stand-alone spy thriller from showrunners Jackson Lanzing & Collin Kelly (Gotham City Garage, Green Arrow) and fan-favorite artist J.K. Woodward (Star Trek: Mirror Broken, Harlan Ellison’s Star Trek:City on the Edge of Forever)

This Star Trek series has been absolutely fabulous. It has captured the original series perfectly and this issue is set to expand on one of the most interesting guest characters – Gary Seven. If you’re a fan of Star Trek this title should be on your pull list. X OF SWORDS FALL OUT! The Captain Commander of Krakoa made a fateful decision. There’s no going back.

More fallout from X of Swords. Plenty has changed for all the merry mutants and I’m curious to see what Hickman has got planned for the next year of X-stories. This issue features art by Phil Noto who has been doing a great job over on Cable. If you’re a lapsed X-fan now is a good time to come back. These books have been great.

Get A SHOCK From Your Radio 2000 AD is proud to announce this new series of half-hour audio dramas based on classic Future Shocks, which will be available exclusively to 2000 AD and Judge Dredd Megazine subscribers!

Future Shocks have been a staple of 2000 AD since 1977, when writer Steve Moore pioneered the short comic book story with a sting in the tail that have seen legendary writers such as Alan Moore, Grant Morrison, and Neil Gaiman hone their craft into the pages of the Galaxy’s Greatest Comics.

Now, those classic stories are gaining new life in new interpretations from some of the most exciting new and established talent in audio drama!

They will be available to current and future print and digital 2000 AD and Judge Dredd Megazine subscribers to listen for free via the 2000 AD app. To access the free podcasts, subscribers will need to sign-in to the app with their Rebellion ID – the same email they use to control their digital or physical subscription.

Print and digital subscriptions to 2000 AD and/or the Judge Dredd Megazine are available from the 2000 AD webshop at shop.2000AD.com with monthly, annual, and two-year options.

The first episode, which goes live on the app on Monday 14 December, is Christmas-themed and is an adaptation of ‘One Christmas During Eternity’ (from 2000 AD Prog 271 in 1982) by Alan Moore and Jesus Redondo and ‘The Star’ (from 2000 AD Prog 297 in 1983) by Chris Lowder and Massimo Bellardinelli, starring Katherine Jakeways, Nitin Ganatra, Steve Nallon, Thomas Tapley, Darren Strange, Lisa Bowerman and Zoe S Battley.

Subsequent episodes will be released in 2021.

Nathaniel Tapley said: “It’s been a real honour to get to work with some of the treasured holy texts of British sci-fi. It’s been incredibly exciting to be able to find some of the most exciting talents at work today, combine them with stories and characters of extraordinary writers and artists, and to get them all to record the whole thing under their duvets as the world outside falls apart.

“Bringing these stories to a new medium with its potential for new audiences feels like a tremendous responsibility, and it’s been amazing to see how the cast and crew have done frankly extraordinary work under difficult conditions. We hope we’ve created something both respectful of the past and new and unique in its own right. Where else can people hear Al Murray as an Australian alien in a story by Alan Moore, Janet Ellis as Nadia, futuristic companion of Blast Barclay in a story by Grant Morrison, or Rufus Hound vigorously pretending to be a car? We’d like to thank Tharg for the opportunity and request that he release our families now.”

Ben Smith, head of publishing at Rebellion, said: “Subscribers are a vital part of 2000 AD and we are always looking for ways to reward them. This year more than any has been incredibly tough for everyone including our own readers, so to be able to give them these podcasts which have been made with such humour and enthusiasm by Natt and his team who have proven themselves to be long-standing admirers of 2000 AD is a real treat. We can’t wait to hear what they make of these first episodes and the rest of the series over the next few months.”

The news comes just days after Penguin Random House announced the first set of 2000 AD series to receive major audiobook adaptations, with Judge Dredd: America, Judge Dredd: The Pit, The Ballad of Halo Jones, Sláine: The Horned God, and Brink, due for release on Audible in 2021.

The Future Shocks that will be featured in these episodes are: