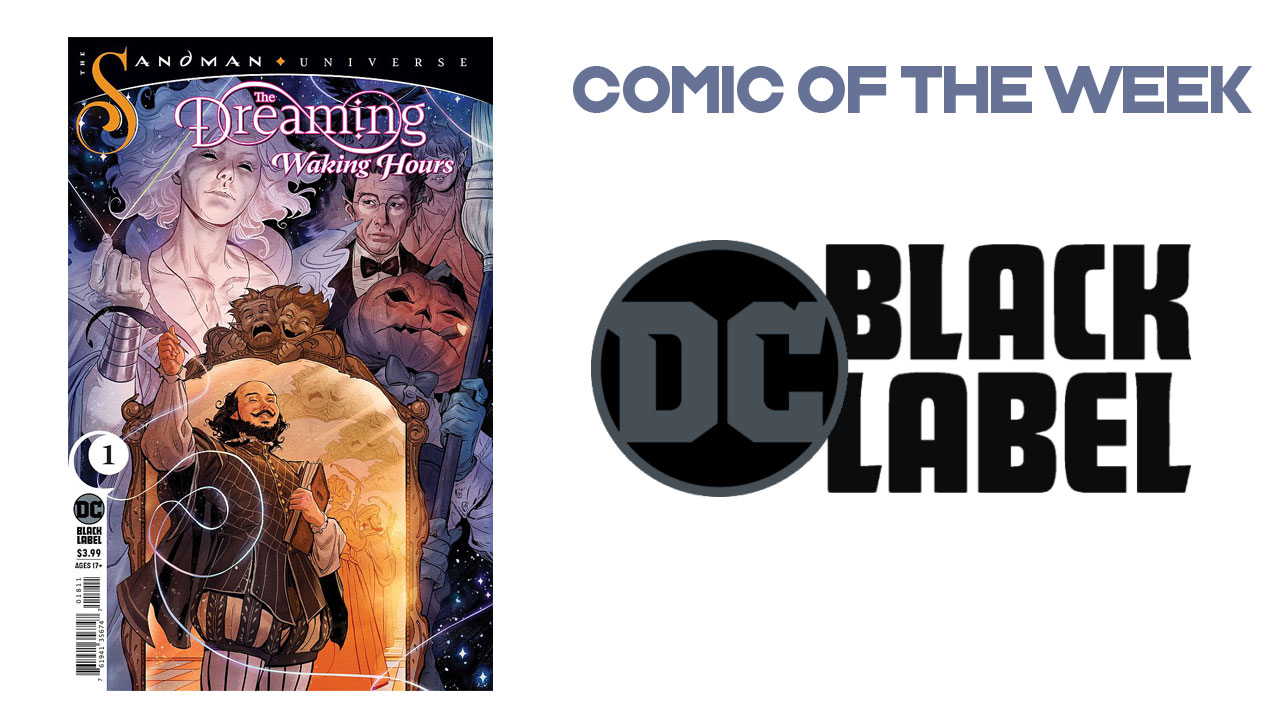 The Geeky Brummie Pull List with The Dreaming: Waking Hours.

This weeks new comics include a new run of a title I was really fond of. The Dreaming: Waking Hours sees G. Willow Wilson of Ms. Marvel fame take over from Simon Spurrier. In the second comic of the week Tom King, Mitch Gerads & Evan Shaner continue their Strange Adventures with Adam Strange and his family.

Genres : Fantasy
From the Publisher:

A new chapter in the Sandman saga begins with an all-new miniseries populated by faces both familiar and new!One of Dream’s heaviest responsibilities is the creation of nightmares—the beings that haunt our sleep and turn our thoughts toward darkness. In the form of Ruin, the nightmare of catastrophic failure, Dream was certain he’d built his next masterpiece…but Ruin can’t help but live up to his name, sending every situation into a spiral of unexpected consequences. Unfortunately, Shakespearean scholar (and exhausted new mother) Lindy has dreamed of Ruin…and in the process, she’s delivered him unto the waking world!The Sandman Universe is changing—and Hugo and World Fantasy award-winning writer G. Willow Wilson (Wonder Woman, Ms. Marvel, The Bird King) and breakout artist Nick Robles (Euthanauts) are here to welcome you!

I loved the previous iteration of The Dreaming. Simon Spurrier and Bilquis Evely did a phenomenal job of bringing back The Sandman to the DC Universe. Now G. Willow Wilson (writer of the hugely popular Ms. Marvel series) and artist Nick Robles have taken over the series for this Waking Hours series. I don’t envy these creators having to following in the footsteps of such a great run of comics but from the previews I’ve seen they appear to be up to the job. I’m looking forward to seeing where this series heads next. Welcome to planet Rann, Mr. Terrific! Earth’s champion of fair play has traveled halfway across the galaxy to investigate firsthand the crimes Adam Strange stands accused of. He’s not going to find many friendly witnesses, though, as the people of Rann consider Adam Strange their true champion. Yet for all the resistance Mister Terrific faces on the surface of Rann, his true opposition may be lurking closer to his subject than he realizes.
This adventure between two worlds continues, with Mitch Gerads drawing the gritty Earth sequences, and Evan “Doc” Shaner showing us the splendor of Adam Strange’s battles in outer space!

In a quiet week I’m hopeful that both The Dreaming and Strange Adventures get the attention they deserve. Strange Adventures continues the run of spectacular comics Tom King is writing. Having his Mister Miracle collaborator Mitch Gerards onboard means this book looks amazing and now with Evan Shaner along for the Rann based sequences it looks even better. I’m really enjoying this book and it’s great to have Adam Strange back in the spotlight again. John McCrea’s first Kickstarter, a collection of  30+ years of creator owned work is now live. This is the first of 4 proposed issues and will include 200-pages of some incredible work, The Atheist with Phil Hester, the Tosspot Four with Garth Ennis, Dinosaurs Rool with Nick Abadzis and an all-new story, Rocket Station Charlie with Gerry Duggan.

The Incal and More Humble Bundle regularly puts up some great comic bundles. These packs allow readers to great fantastic collections of digital comics for a bargin price whilst also supporting great causes. You can currently pick up the Humble Comics Bundle: The Incal & More Presented by Humanoids! This pack includes The Incal Vol. 1-6, Barbarella Vol. 1-2, The Twilight Man : Rod Serling and the Birth of Television, Miss – Better Living Through Crime Vol. 1-4, and more. It’s a spectacular set of fantastic comics you should pick up, you pay what you want from a minimum of £0.78 and a portion of your purchase supports the Hero Initiative.

We’ve been talking about British anthology comics on the show recently with Brawler and The 77, now Pat Mills, legendary creator of 2000AD has stepped into the ring with his new title Spacewarp. Spacewarp looks to shake up British comics in a similar fashion to 2000AD and Mills still retains his razor sharp writing skills, penning all of the stories in this issue. He is joined by artists Ian Ashcroft, Darren Cullen, Mike Donaldson, Charles Gillespie, Ade Hughes and others. Currently available in digital format, I look forward to seeing this one in print in the near future.

Check out the official blurb and a preview of the first few pages of this excellent comic.

From Pat Mills, creator of 2000AD and developer of Judge Dredd, comes SPACEWARP, a British Science Fiction comic of great NEW hero comic strips for the Science Fiction world we live in today.Featuring Special Forces One at war with Giant Viruses! Jurassic Punks versus Dinosaurs! Xecutioners: authorized to terminate Aliens! Slayer – one Robot in a Galactic war against a million Space Knights. Hellbreaker escapes from Hell to punish the Living. Fu-tant – a terrifying school for Mutants!Space Cops! Mutant secret agents! Killer robots! Virus armies! Alien invasions! Interacting in a unique Spacewarp Universe! All stories are creator-owned which means they’re written and drawn to a far higher standard than most comics.

Inventive, action-packed, heartfelt, heroic, humorous, fast-paced and fantastic value for money – as only the Brits know how.

Aimed at ordinary readers of all ages.

COMPLETE in Phase One, so you don’t wait for the next issue to find out what happens. Ready now for you to upload to your brain. With FREE bonus story and EXTRAS on the Spacewarp website: Spacewarpcomic.com.