New comics are still being released and you can get them from comic shops using click and collect or mail order (see the bottom of this post for contact details for some of the biggest stores in the UK) and my pick of the week is We Only Find Them When They’re Dead. Also out this week are the latest issues of Star Trek: Year Five, Excalibur and Bill and Ted Are Doomed. In Meanwhile… we take a look at some more comic related news stories.

Title: We Only Find Then When They’re Dead

Captain Malik and the crew of the Vihaan II are trapped in warp space, as they’re pursued by the mysterious government agent Richter.They have two choices – drop out of warp speed and risk being destroyed by Richter or stay in warp until their engines explode from overheating.Who will survive long enough to discover a living God?

It’s a joy to read Al Ewing doing epic sci-fi. This series is building a vast and fascinating world that clearly gives Al a huge canvas to work with. Simone Di Meo is producing beautiful art that looks like its just waiting to be seen in animated form. Don’t wait to get onboard with this fantastic series. Election season is in full swing across the Federation, and even though it seems ridiculous, Harry Mudd is rising to the top of the polls! The crew of the Enterprise suspects that there’s more to Mudd’s game than just wanting to do his civic duty, and their investigation will uncover a rot that threatens the entire Federation from the inside. The final voyages of the U.S.S. Enterprise continue with the amazing crew of writer Jody Houser (Stranger Things, Harley Quinn & Poison Ivy) and artist Silvia Califano (The X-Files: Case Files)!

I really like this comic. It captures the feel of the Original Series perfectly but also brings in elements of modern Trek, just check out how Harry Mudd looks and you might recognize a familiar face. I also appreciate that this series is beginning to pull in stuff from The Motion Picture which I still feel had some really great designs in its sets and costumes. If you are a fan of this universe you really should be picking up this series. Chapter 15 of X of Swords and I’ve still not caught up. 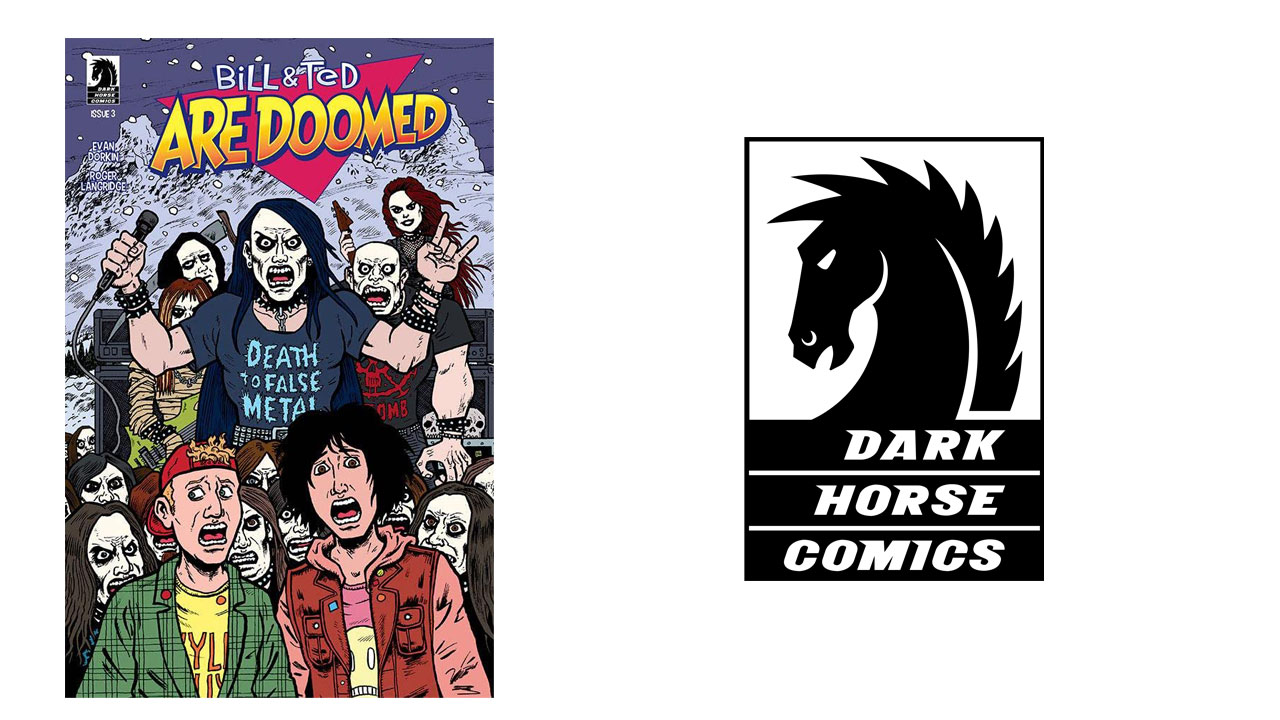 The official prequel series to the upcoming film! With the launch of their world music tour in chaos, Bill and Ted manage to escape a rioting death metal festival only to be marked for death by the insane leader of an evil metal band. With thousands of evil metal fans on a wild hunt for our heroes, can the Wyld Stallyns survive long enough to write the One Song on tour and save the future?! This new series is a direct sequel to Bogus Journey and prequel to Face the Music bringing back legendary Bill and Ted comics writer Evan Dorkin and acclaimed artist Roger Langridge!

I am a huge fan of the Bill and Ted movies and Face The Music was a perfect addition to the canon. This comic is bringing all of the elements of the films together in a funny and playful series that captures the feel so well. This whole thing reminds me so much of all the indie comics from the 80s and all of the great comics Dark Horse have been responsible for. It’s comics like this that remind me why I love this medium so much.

BOOM! Studios has revealed a first look at Dune: House of Atreides #2, adapted and scripted by Brian Herbert and Kevin J. Anderson, who co-wrote the eponymous prequel novel based on Frank Herbert’s notes and illustrated by artist Dev Pramanik, colorist Alex Guimarães, and letterer Ed Dukeshire, in partnership with Herbert Properties LLC and in full coordination with Abrams ComicArts, who are publishing in the fall the first of three graphic novel adaptations of Herbert’s original classic novel Dune.

Pardot Kynes arrives on Arrakis to begin research into terraforming the desert planet, but the merciless Baron Harkonnen has plans of his own. Meanwhile, the sadistic Harkonnens brutally test a young slave named Duncan Idaho. And Leto Atreides meets with the pioneers of space travel technology – taking the first steps towards his incredible destiny.

Check out these lovely preview pages: Dune: House of Atreides #2 features main cover art by Jae Lee and variant cover art by JG Jones. It comes to a comic shop near you on November 25, 2020.

Eisner Award-nominated writer Simon Spurrier (Sandman Universe, Coda) and acclaimed artist Chris Wildgoose (Batman: Nightwalker) present a subversive coming-of-age story about changing the world – and the lines we’ll cross to get everything we want in it.

Three teenagers, each an outcast in their own ways, stumble upon an unearthly entity as it’s born. As they bond over this shared secret and the incredible abilities of their new discovery, the trio soon realizes the truth: this creature is dangerous, powerful…and in need of prey. Guided by the best intentions at first, the teens’ decisions soon become corrupted by adolescent desires, small town jealousies, and internal rivalries, sending them into a catastrophic spiral of their own making.

Here are some preview pages showing just how great Chris Wildgoose’s art is: This edition collects the complete 6-issue series and should be in shops today.

Early this year I backed a Kickstarter by local comic legend John McCrea. This week The Mighty World of McCrea landed on my doormat. This hardback edition harks back to the tradition of comic annuals that filled the stocking of British kids in years past. Collecting material that covers John’s whole career this is a beautiful book and I’m looking forward to delving into its pages. John will hopefully be bringing us further volumes of this series so follow him on Twitter @mccreaman to keep up to date with developments.