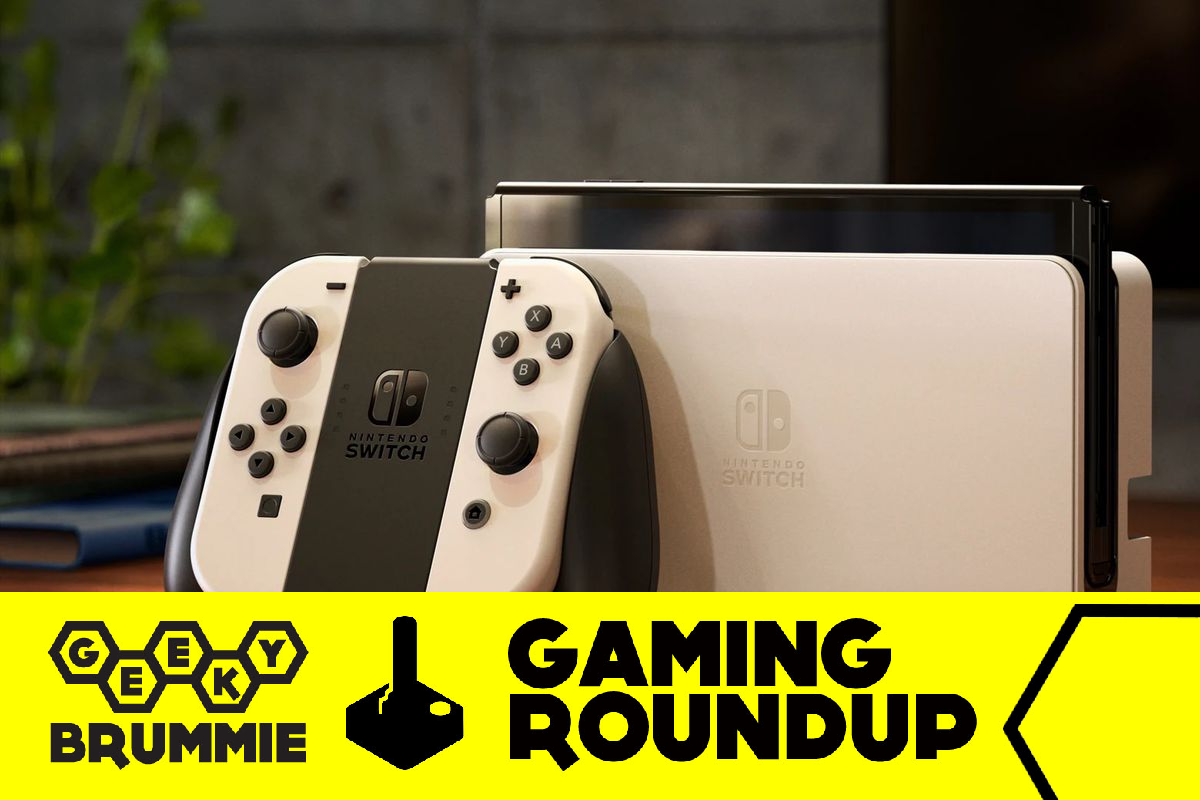 This week, the Switch OLED Edition, Assassin’s Creed, and more, plus all the latest releases! After weeks and weeks and weeks of speculation about the rumoured new Switch model, where wishlists of 4K resolution and exceptional speed and performance, Nintendo have finally revealed what we’ve all been waiting for.

The Nintendo Switch OLED Model is confirmed as a new model with some improvements. Namely, a nicer screen.

What do you mean, is that it?

Yes, despite the rumours, this is not some mid-gen hyper upgrade, this is just minor improvements, like consoles used to do before the PS4 Pro and the Xbox Series X. It’s the Switch Slim, essentially, although as it’s gained a few inches that wouldn’t be the right word.

As the name suggests (yes, “Nintendo Switch OLED Model” IS the official name) the new Switch replaces the previous model’s LCD screen with a fancier OLED, similar to the Vita, a handheld console released by PlayStation a few years ago. It also has twice the storage space, bumping up from 32GB to 64GB, an ethernet port as standard (about time) and most excitingly of all, the dock has curvy bits now.

It may not have the 4K functionality everyone was expecting, but then again, that was only ever a rumour, and why gamers need to stop getting excited over things that haven’t been formally announced yet. Assassin’s Creed Will Be a Live Service Because Of Course

Assassin’s Creed used to be a solid series of historical games with sci-fi conspiracy theories woven in, and is now kind of a bloated mess as publisher Ubisoft keep stuffing the cash cow.

Continuing that theme, Bloomberg have reported that Ubisoft will be turning the franchise into a live service title, currently in development. Because of course they are. The publisher themselves have since confirmed this in a statement that addresses almost everything in Bloomberg’s report.

Details of what that might entail are scarce but there are suggestion it’ll be multiple locations and constant updates. Think Fortnite but it’s an Assassin’s Creed game that never ends instead of a battle royale. It sounds utterly tedious, so here’s hoping it goes the way of 90% of live service titles.

It also suggests this will be the future of the franchise entirely, as it’s being developed jointly by every team involved in the series so far, as Montreal and Quebec are combining their efforts and becoming closer in their efforts.

Hopefully not too close though, and if you’re a regular reader, this is a Ubisoft story so you’ll know where this is going. Remember how I said Ubisoft’s statement addressed “almost” everything? Yeah, that’s right, they’re still protecting sexual predators.

Some managers at Ubisoft’s studios remain in their positions, and internal message boards have been lit up with complaints at the company’s poor ability to tackle the allegations. This is also allegedly one of the key reasons for a departure of staff from the Montreal office, which is now facing increased competition from new studios in the Canadian city.

It’s not the only issue we’ve heard emerging from Ubisoft this week either. Back in June, numerous older titles saw online functionality shut down, although many of these were still playable in single player. Unless you’re playing Might & Magic X, which is now entirely unplayable due to the presence of DRM that requires an online check. A check that tries to reach a server that is now inactive.

The game remained on sale for the best part of a month, and only now has been removed from Steam. There’s no patch turning off the DRM to allow players to enjoy the single player mode, you simply can’t buy it anymore. So everyone who already owns it is screwed. Which is nice.

So in conclusion, never buy anything from Ubisoft again.

Black Skylands (PC in Early Access) is a top down open world action game set in a land of sky pirates. Lots of monster blasting, airship building and generally raising hell as a cool sky captain.

Boomerang-X (PC, Switch) is the latest bonkers action game from Devolver Digital, where you control a mysterious figure wielding a boomerang. The game tasks you with taking on a series of battle arenas, flinging your boomerang around, teleporting and slowing time. It’s pretty solid based on a recent demo I played, even if it wasn’t for me, but if this sounds like your jam, it’s worth checking out.

The biggest release of the week is the second Monster Hunter game of 2021, after Rise launched back in March. Monster Hunter Stories 2: Wings of Ruin (PC, Switch) is the second game in the Stories sub-series, the main franchise’s action RPG trappings have been replaced with turn-based Pokémon style gameplay, as you collect and hatch “Monsties”, travelling the world and solving the mystery of the Wings of Ruin prophecy.

Game of the Week this week is The Fermi Paradox (PC in Early Access), an intergalactic narrative strategy game, where you are a “galactic gardener” overseeing a number of thriving civilisations across the galaxy and managing various planet-wide events that can have wide-reaching consequences. It looks like a neat concept and definitely worth keeping an eye on.

And that’s it! Thanks for joining me this week, and there will be more from the world of gaming very soon!