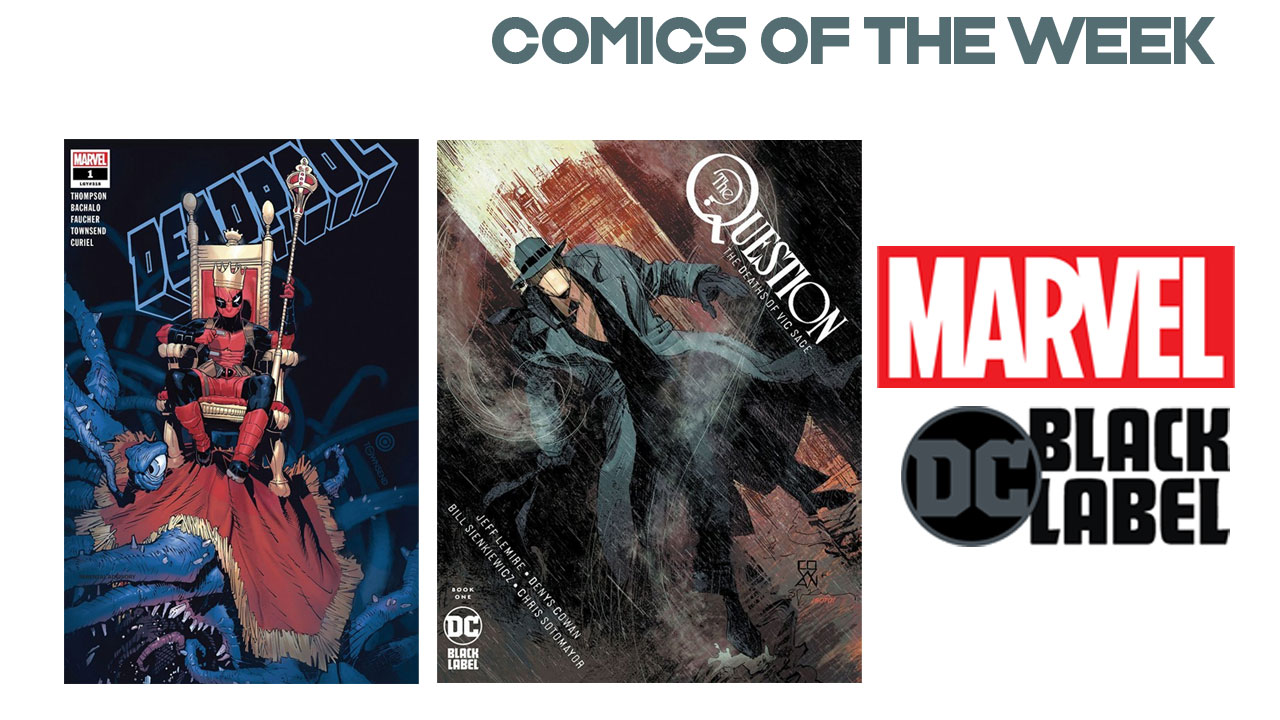 New Comic Book Day with Deadpool (not Deadpool) and The Question.

This has been a hard week to pick from so I’ve decided to go with my first ever joint Comic of the Week. The two titles that have caused me such a conundrum are the new first issues of Deadpool, where the lead character is not the reason I’m looking forward to the book and The Question: The Deaths of Vic Sage. In a very busy week there are a bunch of other great comics to discover this week and you can find them all in my roundup below. Marvel you utter b*stards. I’m not the biggest Deadpool fan but somehow you managed to pull together some of my favourite creators and characters and popped them in a Deadpool book I’ll just have to pick up. Not only is the stella team of writer Kelly Thompson and artist Chris Bachalo on this book but they are bringing ELSA BLOODSTONE and JEFF THE LAND SHARK along for the ride. Now personally I’d buy a book where they are the stars but if I have to put up with Deadpool to get them back in a regular comics then so be it. As seems to be the case with Deadpool lately I’m sure this situation will last long but I’m down to get my Elsa and Jeff fix anyway I can.

“Deadpool is the merc for money and his latest target is THE KING OF THE MONSTERS!

When the monsters set up their new kingdom on the magical land of Staten Island, Deadpool’s mission is to return control back to the people! Will Deadpool use his smooth charisma or deft diplomacy? Or will Wade just skip right to regicide?“ Title: The Question: The Deaths of Vic Sage

The DC Black Label has been a bit hit and miss so far but this week they are putting out a book I just couldn’t pass up. Back in the 80s one of my favourite titles was The Question. Written by Dennis O’Neil with art by Denys Cowan and Rick Magyar with stunning covers by Bill Sienkiewicz this series was incredible and one of the great books DC was putting out alongside the likes of Doom Patrol and Animal Man. To have Cowan and Sienkiewicz return to the character after so long with writer Jeff Lemire is something special. The preview art I’ve seen so far is wonderful. This could be very special indeed.

“For years, Vic Sage has worn the faceless mask of the Question to clean up the streets of Hub City by sheer force of will. He knows right from wrong. He knows black from white. But what happens when he is drawn into a conspiracy that reaches from the heights of Hub City power to the depths of its underground tunnels? What happens when things stop being black-and-white and start getting a little gray? And what happens when, in a secret chamber deep beneath the city, Vic Sage meets his own end…and his new beginning? Eisner-winning writer Jeff Lemire joins forces with the legendary art team of Denys Cowan and Bill Sienkiewicz to resurrect Vic Sage, only to destroy him all over again…and again…” Fan favourites Hazel and Cha Cha from The Umbrella Academy return for their own spin-off special. I don’t really know anything about this comic but it’s certainly coming home with me on Wednesday and it won’t need to be gift wrapped.

“Hazel and Cha Cha-the bizarre assassins who first appear in Umbrella Academy: Dallas and blew audiences away in the Netflix series-track down a rogue time agent and cross paths with a plot to discredit Christmas!”

This weeks round up features the end of some comics and the beginning of other. Every one of them is worth picking up. It’s a bumper week this week so let’s get straight to it with The Immortal Hulk #27, Annihilation: Source #1  and Excalibur #2 from Marvel. Then we have the latest issue of Once and Future #4 and the first issue of Heartbeat #1 from BOOM! Studios, Dial H For Hero #9 from DC/Wonder Comics and He-Man and the Masters of the Multiverse from DC. Then we have Steeple #3 from Dark Horse Comics. Finally we have Eve Stranger #4 from Black Crown and the final issue in the current run of Outer Darkness #12 from Image.