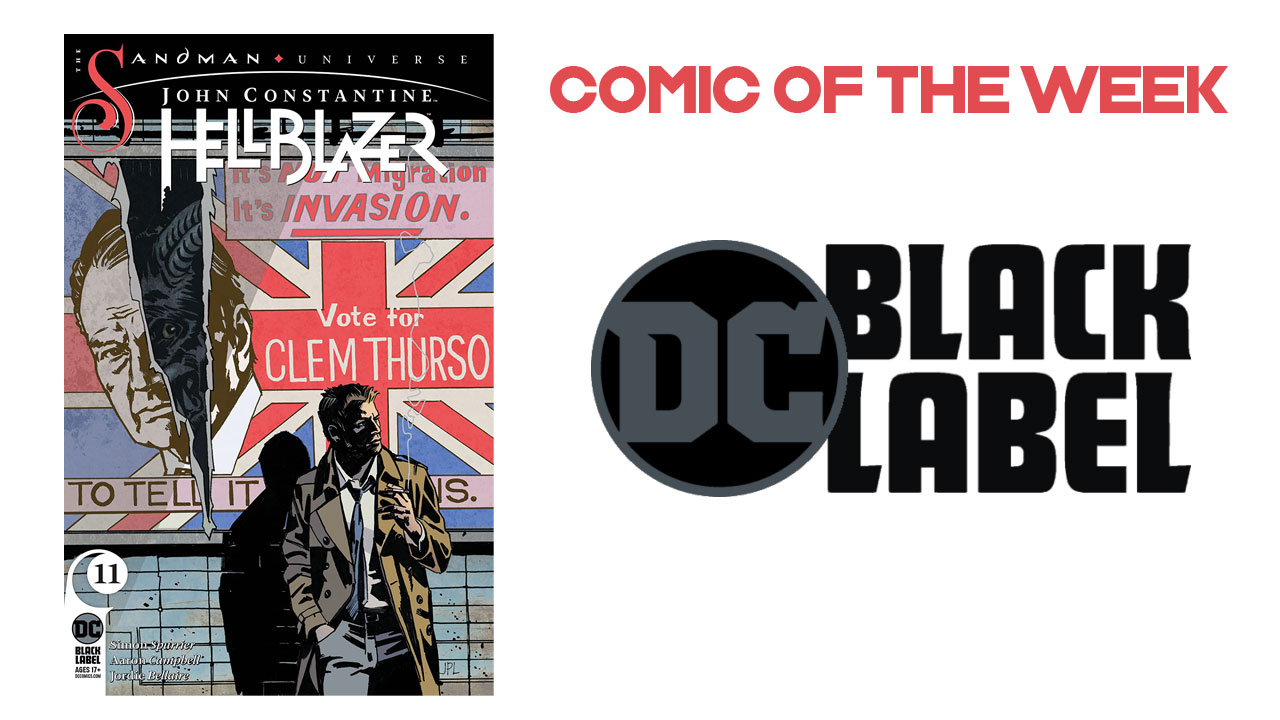 A few more comics are out this week I’m currently enjoying and of course my pick of the week is John Constantine: Hellblazer. Also out this week are the latest X of Swords stand alone issue, Transformers ’84, Star Trek: Year Five, X-Ray Robot and the first issue of Colonel Weird Cosmogog. In Meanwhile… we take a look at some more comic related news stories. A message from Clem Thurso, the most virulently bigoted politician in the UK, unexpectedly sends John on a journey deep into the heart of occult evil-and down into a chamber below Parliament where something truly unspeakable waits…

I believe that this is possibly the best John Constantine book I’ve ever read. Which is high praise indeed as the original run was pretty spectacular. This is the penultimate issue of this run and it’s a real shame DC doesn’t realise it is putting out one of the best comics on stands today. The writing in this book by Spurrier is wonderful and the art of Campbell perfectly captures the unease and horror of John’s adventures. I cannot recommend this book enough and I’m going to miss it when it’s gone. X OF SWORDS PART 11. A ritual. A parliament. A game begins.

As I mentioned last week I’m a bit behind in reading this merry mutant crossover – this stand alone issue is the next chapter in the X of Swords story and is probably quite important in the overall story. The final voyages of the U.S.S. Enterprise continue with the amazing crew of writer Jody Houser (STRANGER THINGS, HARLEY QUINN & POISON IVY) and artist Silvia Califano (THE X-FILES: CASE FILES)! With the Klingon threat behind them, the crew of the Enterprise begins their victory tour of the original planets of the Federation. But they’ll soon discover that for all of the danger they faced on the five-year mission, the biggest threat of all may be something closer to home.

With new Trek taking over our TV screens it has been nice to relive the golden age of TOS in this wonderful series. Showing us the last year of Kirk and co’s original five year mission onboard the Enterprise, it has been more than just a nostalgic trip into the past. The writing and art have captured the look and feel of the 60s original whilst also feeling modern and contemporary. If you have any love for the Star Trek universe you’ll feel right at home between these pages. Wacky space adventurer Colonel Randall Weird leaves Black Hammer farm and embarks on a strange journey through space and time for something that he’s long forgotten with his sanity and life at stake!

“Jeff Lemire’s Black Hammer feels like it’s walking two roads-one honoring the past of superhero comics, and one forging a path into the future of the genre.”-Cullen Bunn

The title alone has me intrigued about this new series spilling out from the pages of Black Hammer. Colonel Weird is one of the esoteric characters in the main series, and you may suffer if you have little prior knowledge of the main storyline. Weird’s has only appeared before in fleeting visits in the main Black Hammer story during his endless journey through time and space, and this series looks to fill in some of the gaps between these appearances. A great character and a great title means I’ve high expectations for this one. Max Wilding, super scientist, travels through another dimension before the Ultimate Nihilist can put an end to both Max and reality itself, while his coworkers are thrown into strange timelines that threaten their safety and sanity—and Max discovers the true identity of the ultimate villain.

One of the best cartoonists in all of comics has done it again! X-Ray Robot is another Allred homerun!!” —Brian Michael Bendis

More madness from the mind of Michael Allred. If you want your comics to be full of joy and unexpected turns then make sure you grab a copy of this book. The epic conclusion to Secrets and Lies! On Earth, Grimlock stands alone against… Megatron?

Meanwhile, on Cybertron, The Wreckers take on their very first mission! The secret history of Earth and Cybertron is revealed!

This is the final issue in this triumphant return to the Transformers universe by Simon Furman. Hopefully he will penning more adventures for IDW as this series has really scratched an itch for someone who read the original Marvel UK stories that Simon so expertly crafted all those years ago. In 2020 it has been lovely to read comics filled with such verve and energy. A absolute pleasure to read.

Did You Kill Jimmy Olsen?

This fabulous little series may have passed you by even if it did feature in the Pull List a couple to times. Written by Matt Fraction with art by Steve Lieber this collected edition of Superman’s Pal Jimmy Olsen: Who Killed Jimmy Olsen? is an absolute joy to read. The perfect antidote to the sometimes overly gritty and dark comics on shelves, this is a comic dedicated to the pure fun of reading comics and I recommend you grab a copy today. BOOM! Studios has revealed today the first look at Once &  Future #13, the launch of a new story arc in the critically acclaimed series from New York Times bestselling writer Kieron Gillen, artist Dan Mora, colorist Tamra Bonvillain, and letterer Ed Dukeshire, about retired monster hunter Bridgette McGuire, her unsuspecting grandson Duncan, and their intrepid ally Rose who protect their nation from legends and myths risen from the grave to battle for dominion over the land.

The arrival of Beowulf and Grendel from the legendary Old English poem was an unexpected one, leaving Team Gran to wonder—if Beowulf can be brought to life, what other heroic figures or deadly creatures might get dredged up from the annals of history to wreak havoc and destruction across the country?!

Meanwhile, in the Otherworld, Merlin is up to his old tricks and crossing over with another story was just the beginning of his plan . . . The Unthinkables Are Coming For You

We looked at this great new comic earlier in the year. Now Unlikely Heroes Studios has taken the leap to bring the book to a wider audience with a brand new Kickstarter campaign. Written by Paul Hanley with art by local boy Ian Richardson we thoroughly enjoyed this first issue and this is a great way to get a copy in your hands. You can read our first impressions here – geekybrummie.com/comics/the-gb-pull-list-preview-review/

Check out these preview pages >