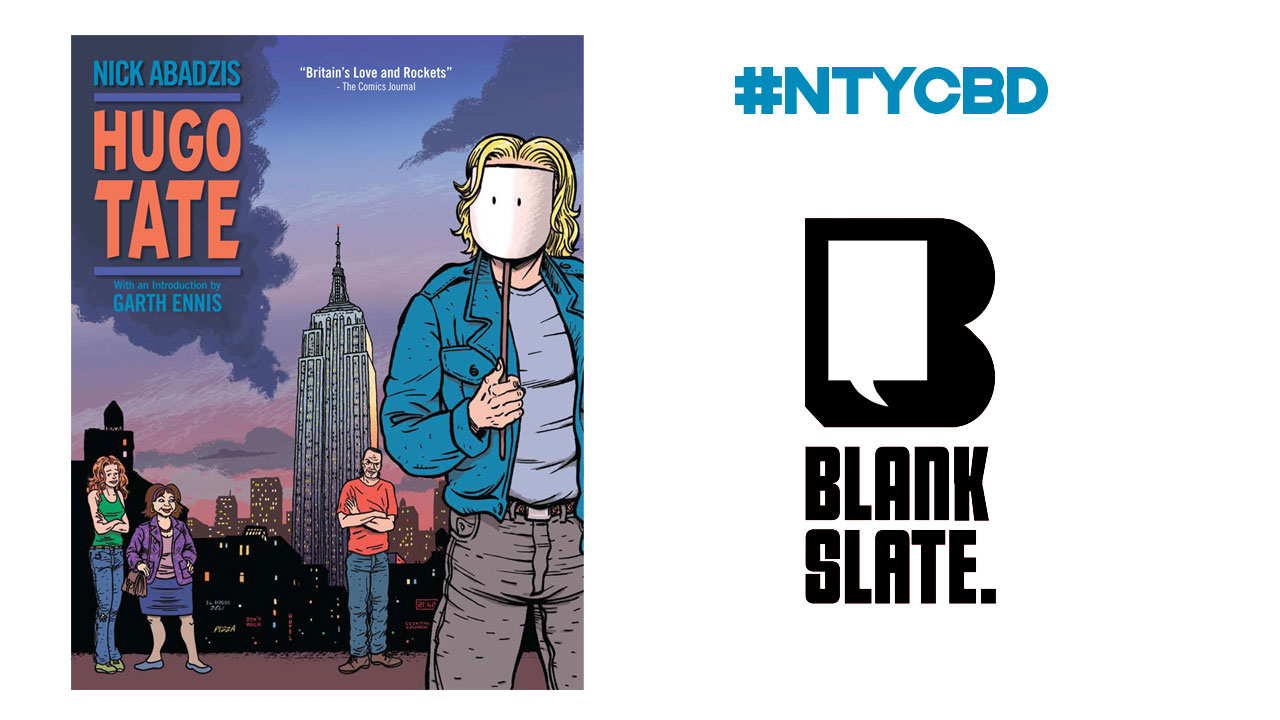 This week I’m going to pick three of the British comic series that had a massive impact on me as a reader. Everyone of these books belong in your collection.

The long-awaited collection of Nick Abadzis’ first magnum opus, from the pages of Deadline magazine.Eighteen years after Hugo Tate drew to a close within the pages of Deadline, the comic’s entire six-year run is finally being collected in a single volume by Blank Slate.Beginning life in 1988 as an acerbic humour strip featuring an eponymous stick man protagonist living in a figuratively-drawn world, Hugo Tate evolved into an intelligent look into the lives of a complex web of characters stretching from London to New York and beyond.Described by The comics Journal as “Britain’s Love and Rockets“, this collection includes the critically-acclaimed final story arc O, America!, in which Hugo finds himself on a drug-fueled road trip across the nightmarish underbelly of the United States. Featuring a gallery of rare extras, all-new commentary from Abadzis and Deadline editor Frank Wynne, as well as a special introduction by Garth Ennis, there’s never been a better time to read – or revisit – this genuine modern classic.

Whilst Tank Girl was drawing all the attention elsewhere in Deadline, one strip spoke to me in a way that meant I’d remember it forever. Hugo Tate was Nick Abadzis first major work as a comic writer and artist. Abadzis perfectly captured that early twentysomething feeling of uncertainty and frustration, a time when you aren’t sure where you belong or what you should be doing. He starts out drawing Hugo and his world as simplistic lines and stick figures but over time moves to a more detailed and realistic style. But Hugo remains a blank, stick-figure face as the people and the world around him grow and mature. And this was something that really resonated with me. This book is truthful, heartfelt, endlessly relatable and, above all, incredibly readable even after all these years. A three page story where Hugo visits his father is one of the most emotional stories I have ever read and reduced me to tears. This book deserves more attention and whilst it is very British it should appeal to everyone who every wondered ‘why am I here?’. I consider Hugo one of my best friends, we haven’t spoken in a while but I’ll never forget him. I think you’ll like him too.

You can find out more about Nick’s work on his official web site at www.nickabadzis.com or follow him on Twitter @NickAbadzis Jobremus Bojeffries is like any other father — trying to keep the peace in a house stuffed with two kids (Ginda and Reth), uncles Raoul and Festus, a baby and old Grandpa Podlasp. Never mind that one’s a werewolf, one’s a vampire, Grandpa is in the last stages of organic matter, and the baby puts off enough thermonuclear energy to power England and Wales…

All right, they’re no ordinary family. And this is no ordinary book, with stories spanning decades, a whole chapter written as light opera, a Christmas episode, and an all-new 24-page comic bringing the Bojeffries up to the present day. On every page, the wry and anarchic creativity of the creators shines through: Alan Moore’s affectionate and penetrating grasp of human nature (and British culture) creates a kind of desperate poignancy in the characters, brought to memorable life by Steve Parkhouse’s deft and articulate line work.

It’s all there, untutored, unpolished, ramshackle and always on the edge of collapse. Very much like Britain itself.

I read The Bojeffries Saga when it was originally serialised in Warrior. It always stood out amongst the V for Vendetta and Axel Pressbutton strips. The bizarre social commentary of the early 80s from Moore coupled with the absolutely wonderful art of Parkhouse punched it’s way into my memory. This was the soap opera I could buy in to. This story is bizarre, crazy and totally British. At times reminiscent of Leo Baxendale, Giles and many other classic British newspaper strips this was the natural evolution of stories from the Beano and Dandy that entertained me as a child. Funny and satirical this is a great little series that has the perfect weird mix of humor, politics and horror I was craving. A time capsule of the age but somehow still has something to say today. DAN DARE, PILOT OF THE FUTURE, IS A BRITISH ICON.

He was created by Frank Hampson in 1950, and first appeared in the Eagle comic where he was an instant hit with the British public. Almost a decade after the original series had ended, Dan Dare was resurrected in the pages of a brand new sci-fi comic for boys – 2000 AD!

Waking from suspended animation after two hundred years, Dan Dare faced an unfamiliar universe, filled with terrible new threats, but also included all too familiar ones, such as his old nemesis, The Mekon!

2000AD arrived in 1977. It stood about amongst the other British comics I was reading at the time. It contained stories and art that fired my youthful imagination. And it started a comic revolution here in the UK. Understandably Dredd quickly established itself as the stand out strip but there was something about this punk reinvention of the Pilot of the Future that I loved. I had some dealings with the original Dare but when 2000AD brought him back with art from Massimo Belardinelli it was like a bomb went off in my head. The stories themselves were slight, weird and ultimately the weakest part of the strip but that Belardinelli artwork was absolutely beautiful. Creepy, weird and visceral it just leaps off the page. Comic legend Dave Gibbons later takes over and delivers some sterling work but it’s those early Belardinelli pages that will stick with you. Probably best read in weekly installments, this probably hasn’t weathered as well as my other choices but I think it still deserves your attention to see how revolutionary 2000AD was in doing something different with comics.