Not many comics on my Pull List this week but my favourite ape, Noam Chimpsky, returns to 2000AD in his own solo series so that instantly warrants Comic of the Week status. Five new comics make it in to our On The Radar section, including the start of Batman: The Adventure Continues Season 2 and you should definitely check them out.

In Meanwhile… I apologise for not getting all my reviews done this week. Incredible SF action from the Eisner-nominated UK anthology! Four new stories start in #2234 – vengeance is in the air in Judge Dredd: ‘Now That’s What I call Justice’; super-intelligent ape Noam Chimpsky gets his own series in Chimpsky’s Law: ‘The Talented Mr Chimpsky’; spinning off from the Regened issues, interdimensional investigators Department K plunge into ‘Cosmic Chaos’; and Cyd is back and heading deeper into the universe in Book Two of The Out. Plus fantasy thriller Feral & Foe comes to its fiery finale!

Following last weeks Regen issue 2000AD is back to its regular programming with four new strips starting this week. Aside from the Dredd story written and illustrated by Chris Weston, the main reason this is my comic of the week is the return of Noam Chimpsky. This time Noam is the star of his own spin off strip and I hope it’s the beginning of a regular slot for my favourite ape. Noam endeared himself to me during his appearances in the main Dredd strip and Niemand and Holden injected so much life into him he quickly became one of my favourite characters to ever appear in the Prog. The splash page is magnificent and if  you’re not onboard for Noam’s adventures you’re probably suffering from a major thrill-sucker infestation. Last time, it was just business – and they destroyed a town and left the Immortal Hulk in pieces. Now they’re in the middle of New York City, fighting a very different kind of Hulk… …and the AVENGERS are taking it personally. When there’s a riot at the Ravencroft Asylum, Nighthawk must descend alone into a realm of madness, surrounded by the most deranged members of his notorious rogues’ gallery, including his archenemy, the maniacal Goblin. The Nice House On The Lake #1

Everyone who was invited to the house knows Walter-well, they know him a little, anyway. Some met him in childhood; some met him months ago. And Walter’s always been a little…off. But after the hardest year of their lives, nobody was going to turn down Walter’s invitation to an astonishingly beautiful house in the woods, overlooking an enormous sylvan lake. It’s beautiful, it’s opulent, it’s private-so a week of putting up with Walter’s weird little schemes and nicknames in exchange for the vacation of a lifetime? Why not? All of them were at that moment in their lives when they could feel themselves pulling away from their other friends; wouldn’t a chance to reconnect be…nice?
With Something Is Killing The Children and The Department of Truth, James Tynion IV has changed the face of horror in modern comics – now get ready for his most ambitious story yet, alongside his Detective Comics partner Álvaro Martínez Bueno! Gotham City is changing. After Mayor Hill is killed by a mysterious assailant, Batman finds himself tracking down an ancient order that’s long been buried under the streets of Gotham: the Court of Owls. But what does this group have to gain from the death of Mayor Hill, and how can Deadman help the Dark Knight? 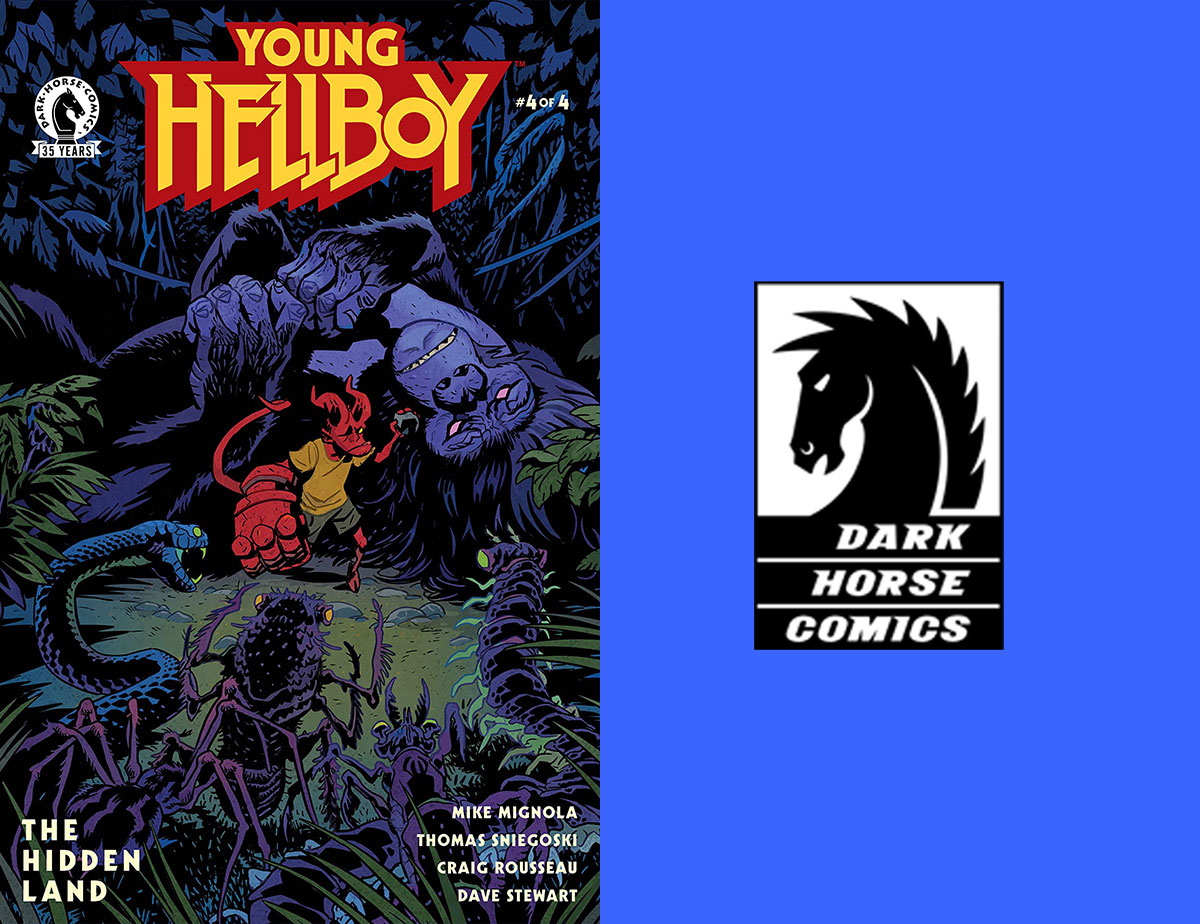 The vampire queen Vesperra has awakened! The ancient ape-god of the island has emerged from his avatar to fight her, but it may not be enough. Can Hellboy, Professor Bruttenholm, and their hosts survive long enough for the two adventurers to escape from the mysterious island they crashed on? Young Hellboy, from Mike Mignola, Thomas Sniegoski, artist Craig Rousseau, and colorist Dave Stewart comes to its exciting conclusion!

There should have been a bunch of reviews this week including a look at the recent Zack Snyder’s Justice League blu-ray but even with a bank holiday time got away from me and I’ve still to finish these reviews.

To distract you from the above take a look at this preview panel from the next issue of The Swamp Thing which features art from the awesome John McCrea in a story that also features the Hellblazer himself, John Constantine.